At first, I didn’t know WHAT to think about that big ogre Shrek (or chicken and waffles, for that matter)! His humor can be a little naughty at times… or a little grotesque (think fart jokes – hey, what do you expect from an ogre?!)… but his loving nature definitely won me over. The truth is, Shrek is an ogre with a heart of gold.

Shrek & Donkey… Who would’ve thought those two would end up being best friends?! They go together like… chick’n & waffles!

My kids love this quadrilogy! The jokes targeted for the older crowd make watching the movie entertaining for everyone. (As a parent, I appreciate that!!) Lest we forget the film’s rockin’ music!!  If you don’t know what I’m talking about, you need to go rent the Shrek-Quadrilogy immediately! (The Pied Piper playing the Beastie Boys may just be my personal favorite touch!)

And who doesn’t love Gingy?!

I have been a fan of Mike Myers since his SNL days, but when you add Eddie Murphy (Donkey), Cameron Diaz (Princess Fiona), John Lithgow (King Farquaad), Antonio Banderas (Puss In Boots), John Cleese (King), Julie Andrews (Queen), Rupert Everett (Prince Charming), Jennifer Saunders (Fairy Godmother) and more… I can totally see how they ended up making FOUR Shrek movies!!  Seriously, I cannot pick my favorite. I like them all for different reasons!!

Those of you familiar with the Shrek movies know how much Donkey LOVES Waffles! And Shrek seems to me to be very much a simplistic “meat & potatoes” kind of ogre. So, I figured that “fried chick’n & waffles” seemed right up their alley… it pinned the tail on the donkey, if you will!!  😉 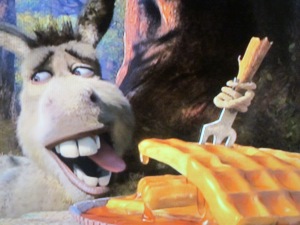 I have NEVER had real chicken & waffles and honestly the combination sounded… strange. But apparently – and maybe this is a southern thing like sweet tea – it is a very popular dish! So, I thought… let’s try it! Worst case scenario, my kids would eat one or the other, if not both!

(Oh- and to make this meal a little healthier, I decided we’d opt for oven-baked fried chick’n and sweet potato waffles.  (If you want to pan fry your chick’n in a pan with oil, go for it!)

To make “Fried Chick’n, I suggest using any of the following: 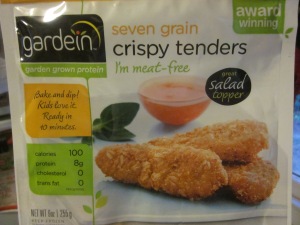 We used these tonight. I highly recommend them. My family loves them!

Simply bake your faux-chicken of choice as directed (or lightly pan-fry it in a skillet with some oil).

To make the Sweet Potato Waffles:

2) In another medium-large bowl, whisk together your egg and let sit 2-3 min… Then whisk it again and add the milk, applesauce, canola oil & sweet potato puree.

3) Stir the liquids into the flour mixture.  The batter will be thick.

4) On a pre-heated waffle iron, spray with non-stick spray and pour batter – I use my 1/2 cup measuring cup. Cook until lightly browned and steaming stops, or until your waffle iron says its ready.

5) Serve immediately by placing a few pieces of “chick’n” on top of or beside a waffle, with real maple syrup on the side. Devour… separately or together!!

Wow. I NEVER would have thought chicken and waffles would be so good together! I love this meal!  It was quick, easy and the kids enjoyed both components… they opted to eat theirs separately… But not me! I ate mine all together, bite by bite, covered in syrup! It just proves the “don’t knock it til you try it” theory! (I felt the same way once about my favorite pizza topping – pineapple!)

Originally my first plan was to make homemade green Split Pea Soup – aka “Swamp Soup”! However, my kids weren’t such huge fans of the soup, and as much as I enjoyed the “swamp soup”, I decided ‘Dinner and a Movie’ nights HAD to be kid-approved… So, we changed it up. Perhaps I will share my “swamp soup” another time!