You may have never wondered what happened to Cinderella’s horse-drawn pumpkin coach after the ball… Well, I like to think that maybe her Fairy Godmother used her magic to “bibbidty-boppity-boo” it into a big pot of this simple pumpkin penne pasta  for all the townsfolk! 🙂 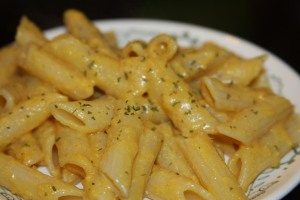 This pumpkin penne pasta is easy, super healthy and mild… which is great if you have kids.  I had never made pasta using pumpkin before this, and I would definitely make this again – with a few additions (mainly to please us adults). Like I said, its pretty mild, so if you want to jazz it up a little, I would suggest adding the kale (as shown in recipe). I got the idea from  Martha Stewart’s pumpkin pasta recipe… She also adds 2 tbsp sun-dried tomato pesto and bakes it at 400 in  a 9×13″ pan for 25-30 min. I liked her ideas so much, I included them as “optional” in my recipe.

My daughter (who will be 5 in January) loves Cinderella. We have a lot of dress up clothes and she often dresses up in her Cinderella dress, gloves, and crown… complete with flashing Disney Cinderella glass slippers that she got for Xmas last year… (thanks, Santa!) As much as she likes to pretend, she knows she will never really be a princess (at least, its highly unlikely)… nor will she be a girl who sits by the cinders & spends all her time cleaning (as I will not allow it).. though tonight, she did do some good cleaning up  – on her plate! 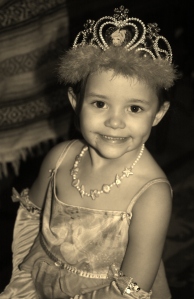 Oh, if only we really could choose to be a “princess” as a career!

Despite the cruel and terrible jealousy she feels from her step-mother and step-sisters, through it all, Cinderella still remains a kind-hearted person… which is the winning point to me in this story. In fact, Cinderella is SO kindhearted, she even finds the time in her busy day of chores to make clothes for little mice!! She is a reminder to us that no matter how bad things get, how much one is ridiculed or picked on, remaining a kind and loving person is what is really important. Good things will happen if you believe and dream that they will! (And there isn’t a better example of good karma than the end of the movie when Cinderella finally gets the respect she deserves and becomes a princess and lives happily ever after, right?!)

1) In a large saucepan, saute onion and garlic in some olive oil until translucent.

2) Add broth, pumpkin and cashew cream to the pot and blend using an immersion blender. (If you don’t have an immersion blender, blend in a food processor – may require doing in 2 batches). Add all of the other ingredients (see note below for kale). Simmer to thicken, about 15 minutes, stirring often. Toss with noodles.

If you are using kale: saute kale with a little olive oil for 2-3 minutes until wilted and stir it into the sauce before serving, or stir into the adults servings only!

We served ours with some bread and butter on the side, which we also used to wipe the extra sauce off our plates! 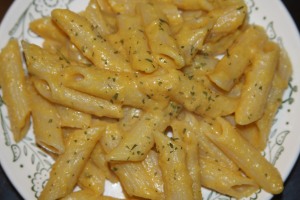 If you are one of those people who can’t seem to get enough pumpkin, there are definitely more than a few recipes out there that are worthy of mentioning. If you are looking for bread, try these Pull Apart Rolls… they look incredible and I know I will be making them VERY soon! If you’re looking for dessert, check out this awesome pumpkin pie I made last year, which is vegan, gluten & soy-free… but no one would ever guess! This chocolate pumpkin loaf looks amazing too! Ahhh!!! Too many choices, too little time! 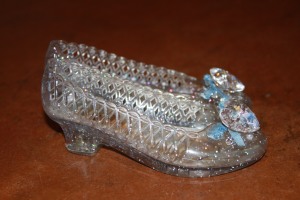 As you can see… what we have here is a very well used & loved pair of “glass slippers”! (And yes, they actually flash & sparkle!!)