There is not much like homemade cinnamon rolls. If you have the time, I strongly urge you to make the real deal yeast-risen kind… You can even prepare the dough at night and put it in the fridge to rise overnight, which bakes up beautiful & fresh in the morning… But… if you wake up on the weekend craving cinnamon rolls and you didn’t prepare the night before, well, dang. Sometimes you just have to figure something out!! Which is where these come in.

So, I was kinda wingin’ it with these and they turned out really good!  You can make them with any kind of milk… almond, soy or even coconut milk from a can… and  you can choose between soy margarine or coconut oil for your fat. I have done them both ways and I recommend using coconut milk (for moistness) and soy margarine (for the flakiest pull-apart sections)! The taste was good when using the coconut oil but it didn’t make the sections flaky like when I used the soy butter. The oil made them almost muffin-y, which isn’t the cinnamon roll I was looking for.

1) Mix dry ingredients and cut in the margarine with a fork or with your fingers until well broken up. Pea sized bits are good. Little bits & pieces make for a yummy flaky dough!

2) In a separate bowl, mix your milk of choice, vanilla & oj.

3) Make a well in the center of the flour mixture and pour the liquids in.

4) Fold the dough gently with a rubber spatula until it is well combined. Try to mix as little as necessary to avoid having tough dough. The dough should be thick but soft. (If the dough seems a little too dry and isn’t coming together, add a teeny splash more of milk. If it’s too sticky, add a tiny sprinkle more of flour. Do this if only absolutely necessary.)

5) Gather the dough into a ball and roll it out into a large rectangle on a lightly floured surface. It really helps to roll it out on some lightly floured parchment if you have any. That way when you are rolling it into a tube, it doesn’t get stuck on the counter as easily. Roll it out to between 1/4″ – 1/2″ thick.

Roll out the dough into a thick large rectangle…

6) Brush the dough with the melted butter and sprinkle the cinnamon and sugar. Leave the very edge uncovered, so when you roll it up and pinch it together, it sticks easier.

7) Roll up carefully & pinch the seam together. Cut the tube into slices (A serrated knife or criss-crossing dental floss to cut the rounds is an easy technique!) Cut them into nice thick rounds… 1  1/2″ wide is good! Im gonna make it a point to shoot for 10 from now on. 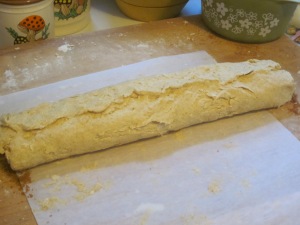 (Tip: On my first attempt, I gave them too much room. I only put 7 in the pan. I guess I was thinking that way they could get really big, which they did, but the sides were too tough/overcooked from being separated – what I learned is that when they spread together and cook while touching, it makes them way more moist & smushy! So go ahead – jam them all in one pan together!

9) Let them cool for several minutes before frosting them with icing of choice. I suggest Frosting #2.

So, I was making the glaze, but then I paused because I remembered… When I was a kid, we used to get those Pillsbury Cinnamon Rolls that you busted open the tube and they were ready to go with the icing on the side – that thick icing that you had to spread over the fresh-baked rolls with a knife… And I thought, this glaze isn’t going to recreate my memory of those cinnamon rolls. It was just too thin. So I added a few things until it thickened up and tasted just right… So I made the glaze above and added:

Blend or whip thoroughly until creamy. Chill until ready to serve. You can thank me later 😉 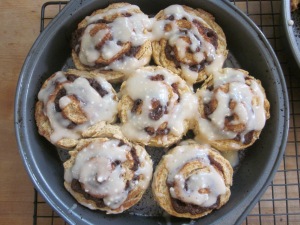 These tasted great but there needed to be more rolls in the pan to keep the sides from being over-cooked. Ooooh! They are soooo goood! I strongly recommend making 10 rolls and squishing them all up in there for No-Rise Perfection! 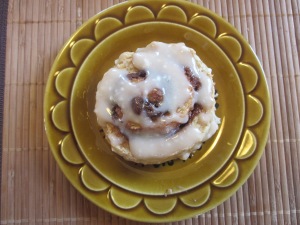 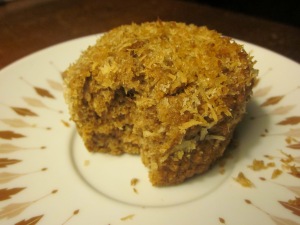 Wow! These muffins are amazing! I love making muffins because they are a great breakfast, snack and healthy addition to my daughters sack lunches.  I made this recipe gluten-free* and soy-free. I really love using coconut oil instead of canola when I can. In my experience, it makes for a moister bread. Also, the benefits of coconut are awesome!  Next time I think Im going to try to make them into jumbo muffins 🙂

* Spelt flour is a good substitute for people with a low intolerance for wheat, though people with serious wheat allergies, such as those with celiac disease, are also allergic to spelt, as it is not 100% wheat-free. If necessary, you can replace the spelt flour with a 100% gluten free baking mix (most grocery stores carry a blend for general flour replacing).

I have a bit of an addiction of downloading free cookbooks onto my kindle… And it doesn’t have to be a vegan cookbook either – veganizing recipes is fun and usually pretty easy! Yes, you could say I’m  bit of a sucker for a bargain – a trait I definitely acquired from my Dad! It’s a blessing and a curse… I truly love scouring through thrift stores to seek out unique treasures to bring home! (My home is filled with such things!) And yet I am simultaneously trying to declutter! It doesn’t help matters much that I’m also a major recycler… I try to recycle everything. Like sometimes instead of throwing something out, I will try to repurpose it… this may explain the boxes and piles I have stashed away that I often pretend are invisible! Overall, I see my recycling efforts as positive. A lot of good things have come from my repurposing! 🙂

The base of this recipe came from one of the free kindle books I got called ‘Smart School Time Recipes’. The original recipe was from ‘Andrea at Bakerymanis.wordpress’, to give credit where it is due, though I did end up altering it quite a bit. 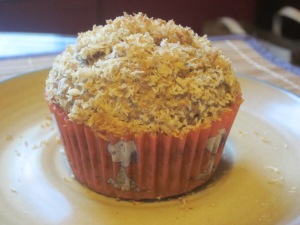 Toasting the coconut is easy!

3) Peel the bananas and mash gently into measuring cup to make 1 cup. Blend in a food processor along with the oil, sugar, non-dairy milk + vinegar. Blend until smooth.

4) Add wet to dry and mix. (The great thing about baking with spelt is you don’t have to worry about over-mixing as you do with gluten-filled flours!) Fill muffin tins equally with batter and distribute topping evenly among the 12 muffins.

5) Bake 23-25 minutes until they start to turn golden brown on top. Let cool for several minutes… then DEVOUR!!!

I love me some muffins!

Finally! Dinner & A Movie night is back! I hope you enjoy this Dinner and a Movie, featuring the ever so popular ‘Shrek’ quadrilogy! Feel free to watch ANY of the Shrek movies with this meal. We watched all four of them over a couple days and ended up eating this meal with the final movie  Shrek –  Forever After.

Read all about our movie night by clicking here! As always, feel free to comment and send me suggestions or ideas! Thanks! Hope you enjoy!

(This is a crock pot recipe, but it only cooks for 1 – 1  1/2 hours & is best if you can occasionally give it a stir.  It can even be started the night before and assembled before cooking. Start cooking this 1  1/2 hours before serving time.)

Fall calls for the start of comfort foods. I can’t get enough thick soups and casseroles this time of year! I remember loving my mom’s chicken noodle casserole when I was a kid. Though this is not based on her actual recipe, it is kind of like my veganized version from my childhood memory. I have been trying more crock pot recipes out lately & intend to try more, especially the long-cooking ones… It’s amazing to come home from work and smell dinner cooking. Its like having your very own private chef! This would be an easy dish to take to a fall pot luck!

I was so pleased that my 3 & 5-year old kids liked this. In fact, I didn’t tell my daughter she was eating seitan (she thought it was “tofu chicken”, which she loves) until she was into her second serving and asking for more of the “tofu”. She was even giving me seriously exaggerated “MMM”‘s! every time she had a piece (she was loving it so much she was rolling her eyes with every bite!).  When I told her she was eating seitan -& loving it – her eyes practically popped out of her head! LOL… We have had numerous failed attempts at finding ways to get the kids to eat seitan, it’s just not one of their favorites. SO, I was stoked it was a hit! Hurray for another delicious & healthy recipe that they enjoy! 🙂  I hope you enjoy this as much as we did! This could easily be baked in the oven in a casserole dish though I until I try it myself, I cannot vouch for oven temp/cooking times as of yet.

A few of my ingredients.. though you could also use fresh mushrooms and peas if you choose.

1) To make the cashew cream sauce, blend in a food processor until smooth & creamy:

2) Heat the oil in a skillet over medium heat and sauté the onion until translucent, about 3-5 min. Add the garlic and mushrooms and sauté until the mushrooms reduce in size and are tender, 5-10 min. (If you use canned mushrooms, just cook 5-10 min as well to blend flavors.) 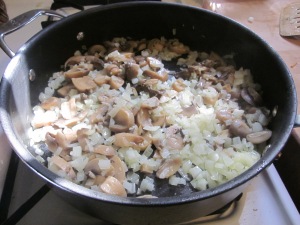 At this point you can refrigerate both the sauce and the veggies, separately, until the next day if you are preparing this ahead.

3) Oil the crock of your slow cooker and combine the sautéed veggies, cashew cream sauce, disintegrated bouillon cube, milk, seitan, pasta, thyme & pepper in the slow cooker. Mix thoroughly and cook on high for 1 – 1 1/2 hours, or until the pasta is al dente. Give it a good stir about every 20 minutes or so.

Ready to seal her up for an hour and a half to cook and thicken up!

4) If the pasta is ready but the sauce isn’t thick enough, stir in the flour. This should help thicken it up. (Note: I added in the flour to find that after I had taken the lid off the crock pot, it thickened up more on its own very quickly!) If desired, add your topping before serving. Devour!!

D’oh! I forgot my bread crumbs!!! (I did add some a moment later once I was eating and realized they had been forgotten!! I put a little fresh basil on mine.)

This was truly delicious & easy. Will make again for sure. Id love to try baking it in the oven sometime with some French Fried Onions on top.  Let me know if you try that! And as always, suggestions and comments are appreciated!